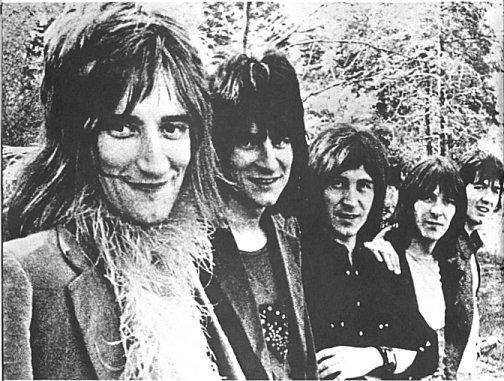 Faces were an English rock band formed in 1969 by members of Small Faces after lead singer/guitarist Steve Marriott left that group to form Humble Pie. The remaining Small Faces—Ian McLagan (keyboards), Ronnie Lane (bass guitar, vocals), and Kenney Jones (drums and percussion)—were joined by Ronnie Wood (guitar) and Rod Stewart (lead vocals), both from the Jeff Beck Group, and the new line-up was renamed Faces. Faces and Small Faces were jointly inducted into the Rock and Roll Hall of Fame in 2012. Wikipedia

When you read most ‘best groups in rock ‘n’ roll’ lists for the 70s you can be fairly certain one group may not be included: Faces. Or The Faces. Big point of contention. Never mind.

Faces’ star did not burn for as long as we had wished but they were one of the single best live bands anyone could hope to see. And they were not too bad in the studio, either.

“Tom Wright was a friend of Pete Townshend’s. He took these photographs in Ann Arbor, Michigan. Pete always encouraged us with whatever we did. I didn’t know him that well but he used to send me messages like, ‘I love your guitar playing.’ It was a freak accident that Tom took Who photos and then Faces photos. I think we were all kind of on acid and in a forest somewhere.” –Ronnie Wood

I was lucky enough to see them play three times, I think, and each of those shows took place in the same horribly, unrelenting hockey arena in Toronto.

The sound was typical for those times as were the sight-lines. Those issues had always distracted from the performance when I had watched other groups in the same setting but it was different with Faces.

When they hit the stage, no matter what stage that might be, they were there with one mission: To put on one-hell of a show.

They clearly loved what they were doing and you had the feeling that, no matter the dark space and the reverb, you might be sitting in your crowded living room, casually listening to the garage band put together by the boys down the street. They were there to play music. To enjoy music. To enjoy enjoying music.

Rod Stewart was the main attraction and the central party boy, of course. He would arrive on stage with a full bottle of Jim Beam or some such and you knew at once that it was not his first offering of the night.

And he would take swigs from the bottle all night -and I mean the bottle and not poncy plastic cup- almost panicking every now and again when he forgot where he had left it. But someone always helped him out.

But otherwise, there was no helping involved. They were as good and as professional as any band from that era.

And there were many names added to the roster over the years but the main core was:

There are at least two things worth mentioning in that list of players.

The first is aside from Rod and the amazing Ronnie Wood, most of those names are probably not known to most people. That is a bloody shame. That trio of bass, drums and keyboard were unrivalled in those days. Kenney Jones’ only equal might have been Fairport’s drummer and Ian McLagan was a absolute constant, playing all the main bits with ease but also constantly adding color to each bar.

And what can one say about Ronnie Lane. A blessed soul and an absolutely brilliant songwriter. Though largely an unheralded genius, neither Small Faces or Faces would have existed without him.

The second point is that you might note that the band had:

Okay? Not two or three guitars. Just the five of them. The only time I remember seeing anything that solid was the brief periods when The Dead, rather accidentally, became a small unit.

But Faces were solid all the time.

And what shows. Jokes, laughing, frolicking. But playing. That was the primary reason they were there.

The Faces catalogue. This was it:

Things slowly came to an end when Mr. Stewart began his solo career in earnest but his first couple of solo albums, Gasoline Alley and Every Picture Tells a Story were basically Faces albums.

But by then the band and Stewart had separate recording contracts and the record companies (surprise!) prevented the Faces name from being used on the solo efforts.

But if you are interested in exploring their back catalogue, do add those two to the Faces output. They are exceptionally good albums.

And of course Mr. Stewart went on to become… well, Rod Stewart and I’m sure most Faces fans stopped paying much attention after Never a Dull Moment, but hats off to him for keeping it going and active and current and for keeping that Rod Stewart dream alive. He was -and remains- a true original.

There are a number of concert videos on YouTube but I have picked two that I think fans new and old might enjoy. (Also check out the many audio-only uploads. Some of those shows are better than the filmed concerts.)

The first, from 1972, shows a rock solid group, now cocky and confident, refined in suit jackets and smiles. Which is not to suggest the music suffered in any way.

The other show, from 1970, highlights the rough and ready Faces. Again, solid sound but almost giddy in their excitement to be playing BBC, perhaps, or just plain giddy for the hell of it.

In both shows you might notice that although the sound is completely professional, there is a unusual ease in their shows. Rod can be seen roaming about the stage, either for a quick hit or a wipe down, arriving back at the mic just in time. Lane smokes and laughs and Kenney and Ian are constantly watching Wood and Rod, trying to ensure they have some idea what is coming next.

And also note the relationship between Rod and Ronnie Lane. Lane traditionally sings the first verse of Maybe I’m Amazed, for example, before handing things over to Rod but watch them when thy come together, which they do often, with the final verse:

You can’t help but think there is much truth in that moment.

(Below) The Original Faces live video from BBC Crown Jewels. This is the video in it’s entirety! Original date, 04/01/1972

“As a kid coming up listening to Rock and Roll, no band better exemplified ‘Party Band’ like the Faces, and no band has since. They wrote drunken, bluesy, cum-drenched Rock and Roll song and delivered them with the ultimate ‘tip and a wink’ attitude. And they always has the best hair.

One of Britain’s greatest contributors to Rock and Roll, the Faces’ brand of pub swagger had the right combination of grit, charm, mischief, soul, style and wicked sense of humour, to make them one of the most iconic bands of all time.”

“We used to play football all the time.  On one occasion we met this guy who gave us some MDMA or something and it meant we spent all day kicking a football, we were so full of energy.  We’d kick it waiting for the car to take us to the airport, and then we’d be kicking it around the airport and then we’d arrive the other end and carry on.”  -Ian McLagan

“They adopted us around Michigan for some reason.  In some of the little suburban towns like Ann Arbor we used to be like gold dust.” -Ronnie Wood