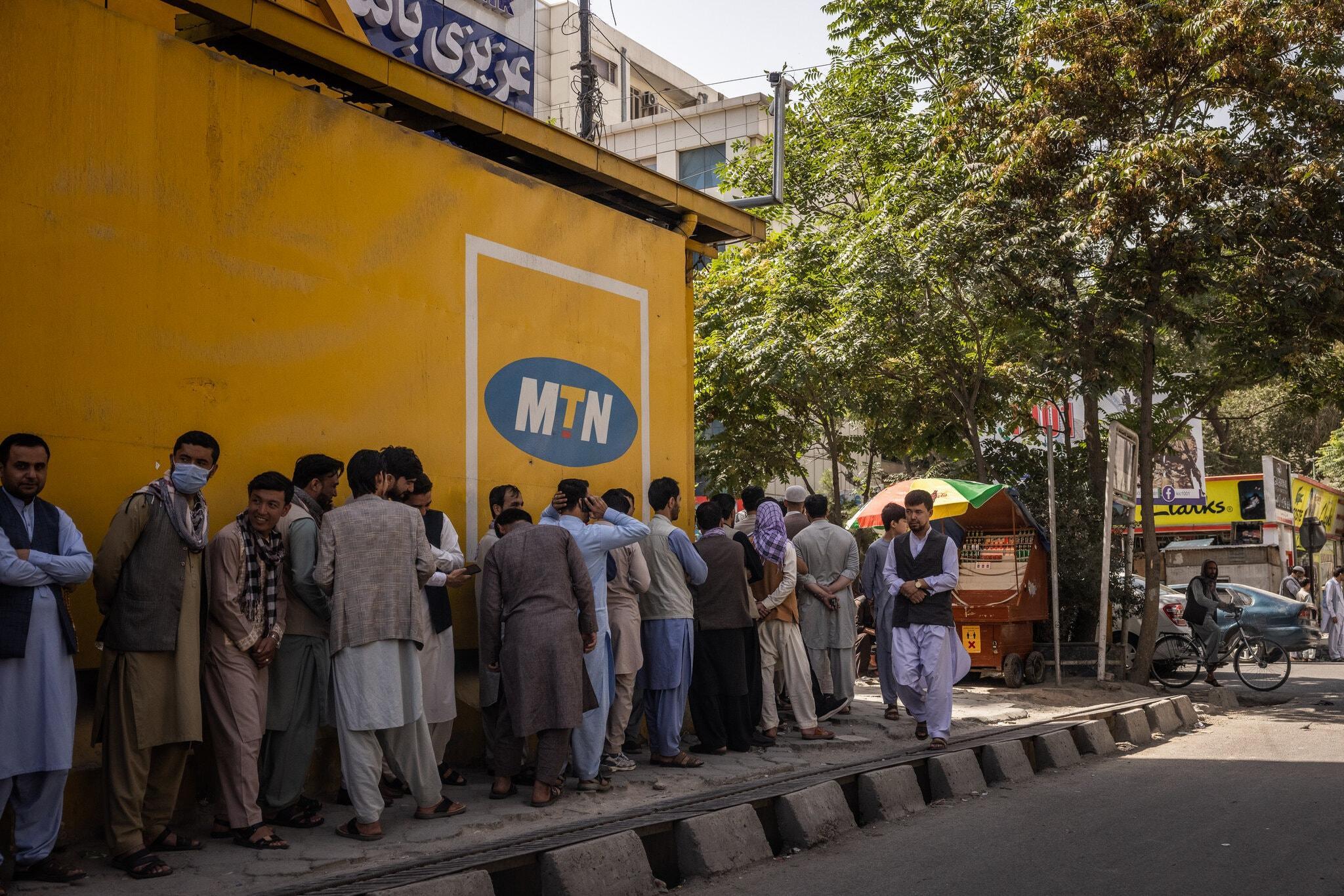 ‘The gravity of the situation is so immense. Every day that passes is going to result in more suffering and more exodus of people.’

$7 billion of Afghanistan’s assets were held by the U.S. Federal Reserve, $3.1 billion in U.S. bills and bonds, $2.4 billion in World Bank Reserve Advisory & Management Partnership (RAMP) assets, $1.2 billion in gold, and just $300,000 in cash. A further $1.3 billion was being held in international accounts

Photo: People stood in line outside Azizi bank in Kabul on Sunday, the first day banks reopened in Afghanistan’s capital.Credit…Jim Huylebroek for The New York Times

WASHINGTON, Sept 3 (Reuters) – The Biden administration has no plans to release billions in Afghan gold, investments and foreign currency reserves parked in the United States that it froze after the Taliban’s takeover, despite pressure from humanitarian groups and others who say the cost may be the collapse of Afghanistan’s economy.

Much of the Afghan central bank’s $10 billion in assets are parked overseas, where they are considered a key instrument for the West to pressure the Taliban to respect women’s rights and the rule of law.

Any unfreezing of these assets may be months away, financial experts said.

Officials from the U.S. State Department, U.S. Treasury, White House National Security Council and other agencies have been in regular discussions about Afghanistan’s finances since the Taliban took over in mid-August, ahead of what the United Nations and others see as a looming humanitarian crisis.

Any decision to release the funds would likely involve top U.S. officials from several departments but will ultimately be up to President Joe Biden, the experts said.

Food and fuel prices are soaring across Afghanistan, amid a shortage of cash triggered by a halt in foreign aid, a halt in dollar shipments and a drought. read more

The U.S. Treasury this week said it had granted a license authorizing the U.S. government and its partners to continue to facilitate humanitarian aid in Afghanistan. It also gave Western Union (WU.N), the world’s largest money transfer firm, and other financial institutions a green light to resume processing personal remittances to Afghanistan from migrants overseas.

The Treasury Department is not easing sanctions on the Taliban or loosening restrictions on their access to the global financial system, a spokesperson told Reuters.

“The United States government has been in touch with humanitarian partners in Afghanistan, both regarding security conditions on the ground and about their ability to continue their humanitarian work,” the spokesperson said.

“As we maintain our commitment to the Afghan people, we have not reduced sanctions pressure on Taliban leaders or the significant restrictions on their access to the international financial system.”

Shah Mehrabi, an economics professor in Maryland and long-time member of the Afghan central bank’s board, a senior Russian official and humanitarian groups are among those urging the U.S. Treasury to also unfreeze the Afghan assets, saying that lives are at stake.

“The gravity of the situation is so immense. Every day that passes is going to result in more suffering and more exodus of people,” Mehrabi said.

The International Monetary Fund has also blocked the Taliban from accessing some $440 million in new emergency reserves, or Special Drawing Rights, issued by the global lender last month.

Adnan Mazarei, former deputy director of the IMF and now a fellow at the Peterson Institute for International Economics, said the United States could not legally release the Afghan assets until there was an internationally recognized government, and that could take many months to occur. The IMF could not act until its board voted, once a government was recognized.

He said a central bank’s reserves are typically not touched except as a last resort. Even Iran, struggling under intense international sanctions, has not used its IMF emergency reserves, he said.

Brian O’Toole, a former Treasury Department official now with the Atlantic Council, said a release of the Afghan assets would not solve Afghanistan’s considerable problems.

“Just releasing those funds doesn’t stabilize the Afghan economy, or do anything like that. What it does is give the Taliban access” to billions of dollars, he said. “I don’t think there’s gonna be a lot of appetite in the U.S. to do that, nor should there be.”

The Taliban can’t get its hands on Afghanistan’s money, much of which is held in the U.S. Federal Reserve Bank of New York. And aid agencies are pausing funding, too.

The Taliban can’t get its hands on Afghanistan’s money, much of which is held in the U.S. Federal Reserve Bank of New York. And aid agencies are pausing funding, too.

For the past 20 years, Afghanistan has been one of the most aid-dependent countries in the world. With the Taliban takeover and the collapse of the U.S.-backed government, which donor countries had supported with pledges in the millions, international donors are halting the flow of aid for the time being.

On Wednesday, the World Bank reportedly halted aid to Afghanistan. Marcela Sanchez-Bender, a World Bank spokesperson said, “We have paused disbursements in our operations in Afghanistan and we are closely monitoring and assessing the situation in line with our internal policies and procedures.”

She added, “We are deeply concerned about the situation in Afghanistan and the impact on the country’s development prospects, especially for women.”

The World Bank’s decision came a week after the International Monetary Fund (IMF) halted Afghanistan’s access to IMF funds. An IMF spokesperson said, “As is always the case, the IMF is guided by the views of the international community. There is currently a lack of clarity within the international community regarding recognition of a government in Afghanistan, as a consequence of which the country cannot access SDRs [special drawing rights] or other IMF resources.”

According the BBC, the World Bank informed staff on August 20 that the organization’s Kabul-based team had been evacuated to Pakistan.

It’s not just international financial institutions and aid that the Taliban are now cut off from. They aren’t able to access much of Afghanistan’s central bank reserves. Most of Afghanistan’s foreign reserves, reportedly around $9 billion, are actually stored in the Federal Reserve Bank of New York, a fact Taliban officials discovered shortly after arriving in Kabul in mid-August.

Ajmal Ahmady, former acting governor of the Afghan central bank, Da Afghanistan Bank, tweeted that while DAB reserves were around $9 billion, “this does not mean that DAB held $9.0 billion physically in our vault.” He explained that most of the assets were held in “safe, liquid assets such bas Treasuries [i.e. Treasury bonds] and gold.”

Per Ahmady, $7 billion of Afghanistan’s assets were held by the U.S. Federal Reserve, $3.1 billion in U.S. bills and bonds, $2.4 billion in World Bank Reserve Advisory & Management Partnership (RAMP) assets, $1.2 billion in gold, and just $300,000 in cash. A further $1.3 billion was being held in international accounts. Ahmady explained that DAB was “reliant on obtaining physical shipments of cash every few weeks,” and pointed to a Wall Street Journal report that the Biden administration had cancelled shipments as the Taliban approached Kabul.

Ahmady’s explainer was prompted by him being told the Taliban were asking DAB staff where all the assets were. He also commented: “If this is true – it is clear they urgently need to add an economist on their team.”

The United States government, in addition to halting cash shipments, has frozen Afghan assets. A Biden administration official told the Washington Post, “Any central-bank assets the Afghan government have in the United States will not be made available to the Taliban.”

With little cash on hand, the Taliban will face a financial crunch soon. While the group has its own sources of funding that have sustained it — such as from the drug trade — taking power in Kabul means taking over a government system again. And governments are expensive to run effectively.

Afghans are already struggling to get their hands on cash to buy basic goods, with reports of long lines at banks and empty ATMs in Kabul. The pain of the cash shortage is amplified by inflation, with prices rising as the Afghan currency, the afghani, collapses.

Uncertainty prevails as to what kind of government the Taliban will establish; that is a critical question for both international players currently holding Afghanistan’s reserves and the aid agencies pausing their projects and funding.