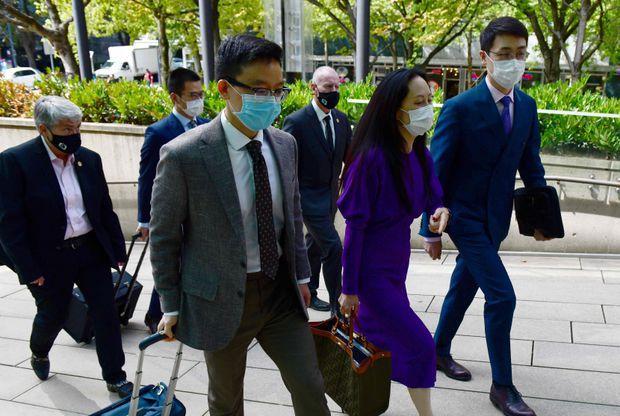 Canadian police arrested Meng Wanzhou in the Vancouver airport at the behest of the US while she was transiting to her next flight.

The United States has resumed discussions with Huawei Technologies Co. Ltd. and lawyers for Meng Wanzhou about a possible deferred prosecution agreement for the Chinese executive that could allow her to return to China, according to Canadian sources.

The development could open the door for China to free Canadians Michael Kovrig and Michael Spavor. Canada has accused Beijing of holding them hostage in retaliation for the arrest of Ms. Meng, who is detained in Vancouver and fighting extradition to the United States.

Two sources told The Globe and Mail the U.S. Department of Justice has been in talks for weeks with Huawei and lawyers for Ms. Meng, daughter of Ren Zhengfei, founder of the Chinese telecommunications giant. Those talks do not involve the fate of the two Canadians jailed in China.

Ms. Meng was detained at Vancouver International Airport in December, 2018, on a U.S. Justice Department extradition request for alleged bank fraud related to violations of U.S. sanctions against Iran.

Meng Wanzhou’s extradition case: Everything you need to know as hearing ends with reserved decision

Editorial: For the two Michaels, the road out of China may go through Washington

The U.S. is prepared to end the extradition request and criminal proceedings against Ms. Meng if she pleads guilty and pays a hefty fine, the sources said. Huawei accepting corporate responsibility for violating sanctions is not part of the discussions, the sources said.

The Globe is not identifying the sources because they were not authorized to publicly discuss the sensitive and confidential negotiations.

In late 2020, the U.S. Justice Department also held discussions with Huawei on a plea agreement.

Reid Weingarten, the lead U.S. lawyer for Ms. Meng, could not immediately be reached for comment on Friday.

The Department of Justice has the power to withdraw the extradition request and the arrest warrant for Ms. Meng.

Sources said the talks hinge on Ms. Meng’s willingness to accept a plea deal, which she rejected in December, 2020, when the U.S. Justice Department first held discussions about a deferred prosecution agreement.

The sources said the current negotiations do not involve a quid pro quo for the release of Mr. Spavor and Mr. Kovrig, who were arrested in China on espionage charges shortly after Ms. Meng was detained. They have been held in Chinese prisons while Ms. Meng is out on bail and living in a $13.7-million Vancouver home while she contests her extradition.

In June, The Globe reported that Canada’s ambassador to China, Dominic Barton, spent three weeks in Washington in early April holding talks with senior officials in the Biden administration aimed at facilitating the release of two Canadians.

Mr. Barton met with officials from the White House National Security Council and the departments of Justice, State, Defense, Treasury and Commerce. He also held talks with Cui Tiankai, China’s ambassador to the United States.

China put Mr. Kovrig and Mr. Spavor on trial in March. They were charged with spying as part of a process that Canada and dozens of allies call arbitrary detention on bogus charges in a closed system of justice with no accountability. A Chinese court in August found Mr. Spavor guilty of espionage and sentenced him to 11 years in prison. He has appealed the ruling. The verdict for Mr. Kovrig has yet to be announced.

The two men are not allowed visits from family or lawyers. Canadian diplomats see them about once a month in a video link.

Huawei, which is based in Shenzhen, China, has made freeing Ms. Meng one of its priorities.

Alykhan Velshi, the vice-president of corporate affairs for Huawei Canada, who was hired shortly after Ms. Meng was arrested, has spent the past few years trying to build support around the world for the arrested tech executive, including conducting background briefings with lawyers and media in Europe, Asia and North America.