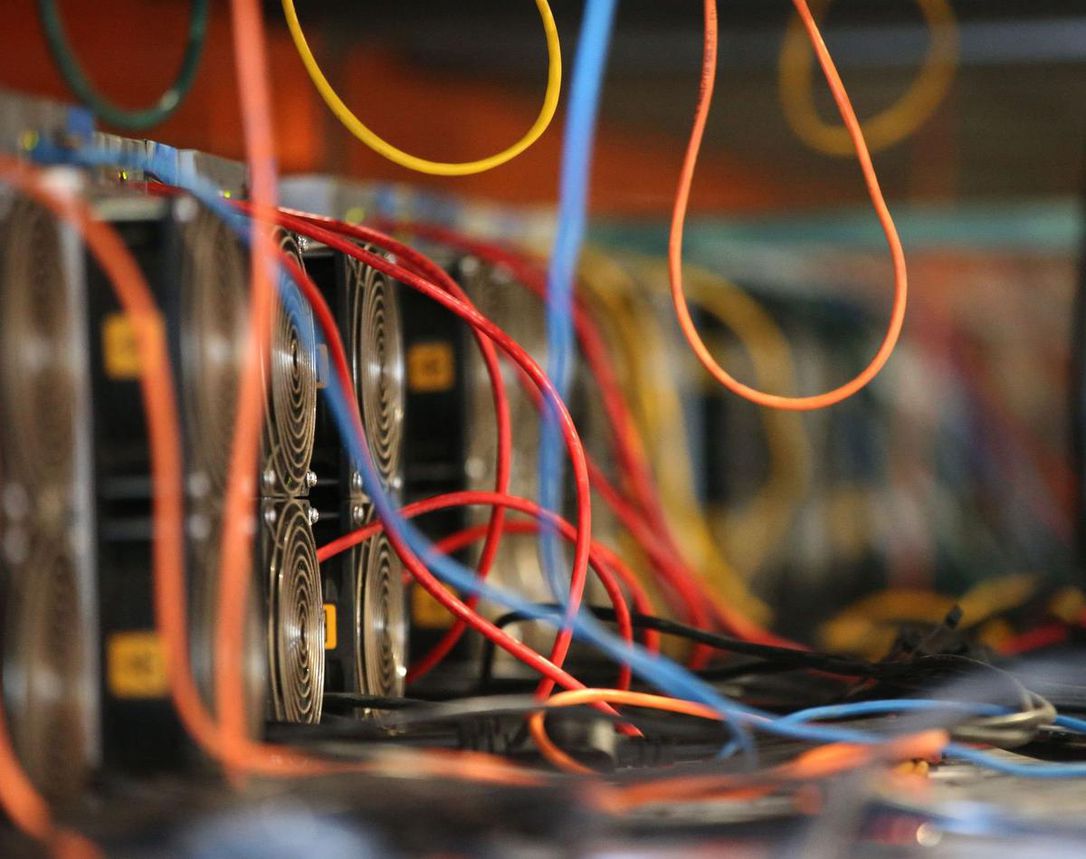 Photo: Wires connect crypto mining computer servers in June at the Sangha Systems cryptocurrency mining facility in Hennepin, Ill. Jim Stanford says the most repugnant aspect of cryptocurrencies is the enormous amount of energy needed to power the millions of computers engaged in their “mining.”  ANTONIO PEREZ / TNS

This author suggests cryptocurrency ‘mining’ adds twice as much to carbon pollution as Canada’s entire mining and petroleum industry. And what is it good for?

Binance runs one of the largest cryptocurrency trading operations in the world, helping customers speculate on the wild price gyrations of bitcoin and other crypto assets. But last week it closed its Ontario operations, following a crackdown by provincial regulators on cryptocurrency trading. The company also faces regulatory challenges in the U.K. and Japan.

Other cryptotraders (including Bybit Fintech) have been accused by the Ontario Securities Commission (OSC) of unregistered trading and failing to disclose required information. It’s a sign Canadian securities regulators are trying to impose some law and order in the Wild West world of cryptocurrency. Central banks (including the Bank of Canada) are also monitoring risks to financial stability from this frenetic digital casino.

Instead of waiting for the sheriff to knock on its door, Binance left town. Other crypto platforms will likely follow. Some financiers complain this “red tape” will lock Canada out of a new growth industry. But I say good riddance to them all.

The crypto craze carries the same financial and moral risks as every previous speculative bubble: from Dutch tulips to gold manias to the 1990s dot-com craze. Each bubble is inflated by cheap credit and the age-old dream to buy low and sell high (the other way ’round for short traders).

But speculation involves no useful production or value-added at all. And when gamblers play with borrowed money (leveraged at ratios of up to 100 to 1), we all pay the price when the bubble inevitably pops. That moment may be nigh: bitcoin has already lost almost half its value since April.

But even compared to past speculative bubbles, cryptocurrencies are uniquely wasteful and destructive. Unlike gold (which can make jewelry), fine art (which is pleasant to look at), real estate (which you can inhabit), or even tulips (which add to any garden), cryptocurrencies have no inherent or productive value whatsoever.

Libertarian crypto-boosters claim they are an alternative form of money, free from government control. That is nonsense. To serve as money, an asset must have three key attributes: a unit of account, a store of value and acceptance as payment in exchange.

Wild and continual swings in the value of bitcoin and other crypto assets prevent them from serving any of those functions. And the absence of government sanction means its appeal depends solely and precariously on mass psychology: the willingness of others to take it seriously. That won’t last long. Canadian Tire bucks are closer to true money than cryptocurrencies. And the only people who genuinely use cryptocurrencies to finance exchanges are gangsters and tax evaders.

The most repugnant aspect of cryptocurrencies is the enormous amount of energy needed to power the millions of computers engaged 24-7 in “mining” (digitally creating) new currency. Bitcoin mining alone uses up more electricity each year than a medium-sized country (like Norway or Argentina). Even trading a single bitcoin needs enormous electricity to power the massive calculations needed to keep the transaction untraceable.

Economist Alex de Vries estimates bitcoin mining adds 90 megatonnes per year to global greenhouse gas emissions. Including other cryptocurrencies, and the energy used for transactions, this ultimately pointless activity adds twice as much to carbon pollution as Canada’s entire mining and petroleum industry. Where is Jane Fonda when you need her?

An alien watching from outer space would scratch their heads over why supposedly intelligent life would waste so much brainpower and electricity on such an utterly useless activity.

Yes, securities regulators should throw the book at the cryptotraders. But merely requiring them to file lengthy prospectuses and inform customers about risk isn’t enough. We should go further, and actively discourage this wasteful industry. Cryptocurrency assets should be excluded from tax-sheltered vehicles like RRSPs. And the other tax subsidies fuelling this speculation should also be withdrawn: like writing off interest costs and other investment expenses, and the 50 per cent exemption of trading profits from income tax.

After all, if you work all day flipping burgers for minimum wage at McDonald’s, you must count every penny of your hard-earned wages on your tax return. We should expect the same from those who flip bitcoin. Cryptocurrencies are surely the best reason ever to reorient our economic and tax policies to reward real work, rather than pointless, polluting speculation.

Jim Stanford, director of the Centre for Future Work in Vancouver, is a freelance contributing columnist for the Star. Follow him on Twitter: @jimbostanford