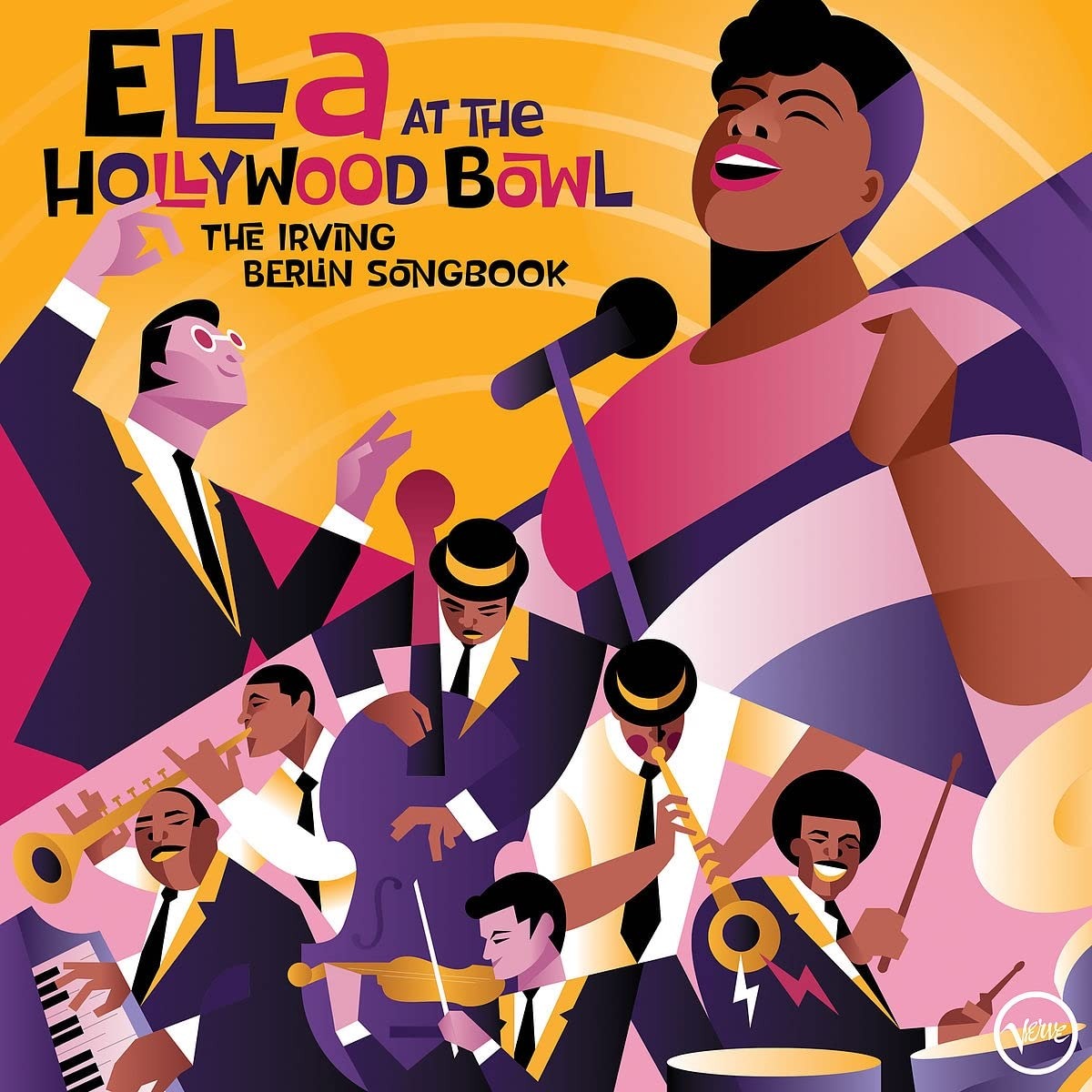 The tapes for this historic Ella Fitzgerald concert languished in a private collection until a few years ago. This is the first complete concert recording of one of her songbook albums

Photo: Ella Fitzgerald performing at the 1957 Newport Jazz Festival, one year before an Irving Berlin concert at the Hollywood Bowl.

Ella at the Hollywood Bowl: The Irving Berlin Songbook will be released on June 24 on Verve;

‘Ella At The Hollywood Bowl: The Irving Berlin Songbook’

Ella Fitzgerald didn’t win Album of the Year at the first annual Grammy Awards. But the album that earned her that nomination, Ella Fitzgerald Sings the Irving Berlin Songbook, did prevail in the category of Best Vocal Performance, Female. It was one of Fitzgerald’s two trophies that evening, and the start of an illustrious track record at the Grammys, befitting a singer rightly heralded as the First Lady of Song.

Her exalted stature and warm reception in the recording industry were hardly arbitrary. By 1958, when Verve Records released Ella Fitzgerald Sings the Irving Berlin Songbook, the artist and her audience both understood it as the product of a winning formula.

It was her fourth album in a pioneering series produced by Norman Granz, spotlighting the repertory of a single composer or composer-lyricist duo. (The previous entry in the series, Ella Fitzgerald Sings the Duke Ellington Songbook, yielded her other award at the inaugural Grammys, for Best Jazz Performance, Individual.)

According to jazz critic and historian Will Friedwald, Berlin had been so impressed by Fitzgerald’s first three songbook efforts that he offered to cut his standard royalty rate in half.

The rare cachet of the songbook albums is one way to make sense of the unusual decision to present Ella in a split program of Cole Porter and Irving Berlin repertory at the Hollywood Bowl, on Aug. 16, 1958.

She performed with an elaborate congress of musicians billed as the Hollywood Bowl Pops Orchestra, conducted by Paul Weston, who’d also conducted and arranged the orchestra on the Berlin songbook album.

Granz recorded the performance, but not with the intention of a commercial release; the tapes languished in his private collection until a few years ago, when they were discovered by Verve executive Ken Druker and Grammy-winning producer Gregg Field.

Now the label is finally poised to release Ella at the Hollywood Bowl: The Irving Berlin Songbook — the first complete concert recording of one of Fitzgerald’s songbook albums, and the only known occasion where she sang this material with a full orchestra. Verve will release the album on June 24; today it dropped a first single, “Puttin’ on the Ritz.”

Already a vintage classic in 1958, Berlin had written “Puttin’ on the Ritz” three decades earlier, creating an instant fascination with his use of syncopation in the melody.

That seat-of-the-pants equilibrium, familiar from iconic albums like Ella in Berlin: Mack the Knife, was not usually expressed on Fitzgerald’s songbook fare. For Field, who spent a year or so as her touring drummer during the latter part of her career, it’s a specific reason to hail the release of Ella at the Hollywood Bowl: The Irving Berlin Songbook.

“The Ella that we know, there’s more of that on this live recording than there was in the studio,” he says. “She Ella-cized it, I suppose, to coin a phrase. Because I’m sure that when she got in the studio, she was given the music. I’m sure that she sat down with a piano player and they worked it out and all the arrangements were done. But, you know, I would be very surprised if she actually got to rehearse with the orchestra for days on end. They probably just went in, and she knew how the arrangements worked, and they recorded it. So this is her being given a shot at diving deeper into that music.”

Field mixed the new album from the original quarter-inch tapes, a process that posed some challenges, given the fullness of the orchestration and the late-’50s recording technology. The clarity of Fitzgerald’s vocals on the end result was made possible in part, he says, by iZotope production software: “It really gave me the ability to go in and use more contemporary mixing techniques. I don’t know that this album could have come out three or four years ago — but with the software that we’ve got now, we were able to get in and do some surgery and bring it to life.”

In its physical incarnation, Ella at the Hollywood Bowl includes scrupulous liner notes by Friedwald, author of several books on jazz singing. Among his key points is that fact that “to come on stage — with a full orchestra — and essentially sing the contents of a studio album, well, nobody did that. Not Sinatra, not Tony Bennett, not Miles Davis, nor any of the other key innovators who contributed to the development of what came to be known as ‘the concept album.’”

The one missing piece is any detailed information about the musicians who played on the concert. When Fitzgerald and Weston had recorded the Berlin songbook album, their coterie had included familiar names like guitarist Barney Kessel, trumpeter Harry “Sweets” Edison, pianist Paul Smith, and saxophonist Ted Nash (the late uncle and namesake of a longtime member of the Jazz at Lincoln Center Orchestra).

“I reached out to the L.A. Phil to find out if there was any documentation of who the musicians were, and they didn’t have anything,” says Field. “And then if the intention had been to make a recording, the Local 47 would have some sort of contract records, and they went through their archives and couldn’t find anything.”

What matters most, of course, is Ella — who is in spectacular form throughout the concert, swinging hard and bright on a tune like “Cheek to Cheek” and limning new emotional depths on ballads like “How Deep is the Ocean” and “Always.” It’s tantalizing to consider that the other half of this concert program drew from her Cole Porter songbook album, the one that started it all. But there’s no reason to get hung up on that just yet. This new windfall should provide plenty to chew on, for quite some time.

Ella at the Hollywood Bowl: The Irving Berlin Songbook will be released on June 24 on Verve;

For five decades, the First Lady of Song filled the Hollywood Bowl with her incomparable presence and left a lasting mark on the landscapes of jazz and Los Angeles.

In recent weeks, we’ve asked members of the Hollywood Bowl family, past and present, who their favorite performers have been. Their answers have shown a remarkable lack of variety:

“When I was in college at USC, I got a group of friends together to hear Ella Fitzgerald at the Bowl, which I think ended up being one of the last times she was there. We were way up in the benches, but it didn’t matter at all.”GAIL SAMUEL, HOLLYWOOD BOWL PRESIDENT

“Being able to see the jazz performances, Ella Fitzgerald, that was the pinnacle.”MARK LADD, ASSOCIATE DIRECTOR, OPERATIONS

“I must have heard Ella Fitzgerald at the Bowl half a dozen times. I get goosebumps just thinking about it.”ARA GUZELIMINIAN, DEAN AND PROVOST, THE JUILLIARD SCHOOL (FORMERLY LA PHIL ARTISTIC ADMINISTRATOR)

Fitzgerald holds the rare distinction of having sold out the Hollywood Bowl’s 18,000 seats in each of five decades, from the 1950s through the 1990s  Fitzgerald was more than just the Bowl’s most popular performer — her ability to make the largest venue feel like the most intimate space changed the definition of what was possible for the Hollywood Bowl.

The story begins in August 1956, when Fitzgerald made her Bowl debut alongside Louis Armstrong. Legendary jazz impresario Norman Granz produced the show, recorded it, and released it on a double album titled Jazz at the Hollywood Bowl.