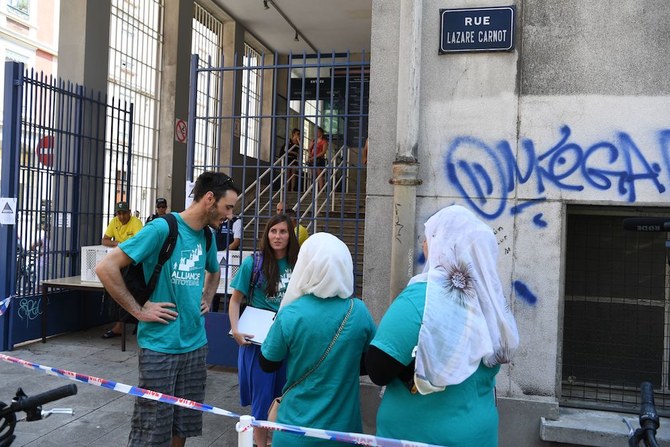 Photo: Members of the “Alliance Citoyenne” association gather at the Jean Bron municipal swimming pool in Grenoble at a previous protest in 2019. (Jean-Pierre Clatot/AFP via Getty Images)

The ‘issue’ has been described as either a violation of ‘the country’s secular values‘ or banned ‘for reasons of hygiene.’ Men are also barred from wearing shorts and must instead wear ‘tighter trunks.’

They wore the suits in a protest against anti-Muslim discrimination in France. The women were among a group of 30 from Citizen Alliance, an activist group that staged the protest in order to push Grenoble’s Mayor Eric Piolle to lift a ban on the burkini in public pools.

Burkinis, a mix of the words “burka” and “bikini”, are marketed to Muslim women as a way for them to swim in public while adhering to modesty edicts. But the burkini remains controversial in France, where authorities in several French towns have proposed banning the garment altogether.

Burkinis are banned in most French public pools and on some beaches for reasons of hygiene, but civil rights activists have criticized the ban as discriminatory and Islamophobic.

Men are also subject to clothing restrictions; they are barred from wearing shorts and must instead wear tighter trunks.

One of the Grenoble pool protesters, Naima, said it was the first time that she had bathed in a public pool for 10 years.

“It was 20 minutes of happiness. People applauded when we went into the water with our covering swimsuits,” she added.

Annabelle Bretton, a deputy mayor of Grenoble, said she had met the protesters and told them that the city will continue to require compliance with the hygiene rules. “They want us to change but it’s not on the agenda,” she added.

“Burkinis” — a swimsuit that covers the whole body except the face — have been outlawed by several French municipalities since 2016, arguing the costumes violate the country’s secular values. But activists have argued that the ban is rooted in Islamophobia.

The burkini issue pertains to a wider debate in French society over the public expression of religion, in particular for France’s millions of Muslims, who make up around 9 percent of the population, according to research conducted by Pew in 2017.

The debate follows announcements by President Emmanuel Macron earlier this year that he would seek to curb Muslim “separatism” in French society, which he said is antithetical to the values of the secular republic.

Piolle has written to Macron requesting national guidelines for what is acceptable swimwear. The mayor asked the government to “set all the criteria to be used for banning swimwear, including size, material and the surface in contact with the water.”

French public opinion strongly supports a ban on the Muslim swimwear, polls suggest, but Citizen Alliance notes that covering swimsuits are allowed in Rennes, capital of the French region of Brittany, and in public pools in Germany, Britain, Italy and Norway.

They also pointed to a ruling by the deputy national ombudsman, George Pau-Langevin, that found banning the swimwear amounts to discrimination.

“Since they are designed for bathing, neither the security nor the hygiene of bathers appear on the face of it to be threatened,” Pau-Langevin said.