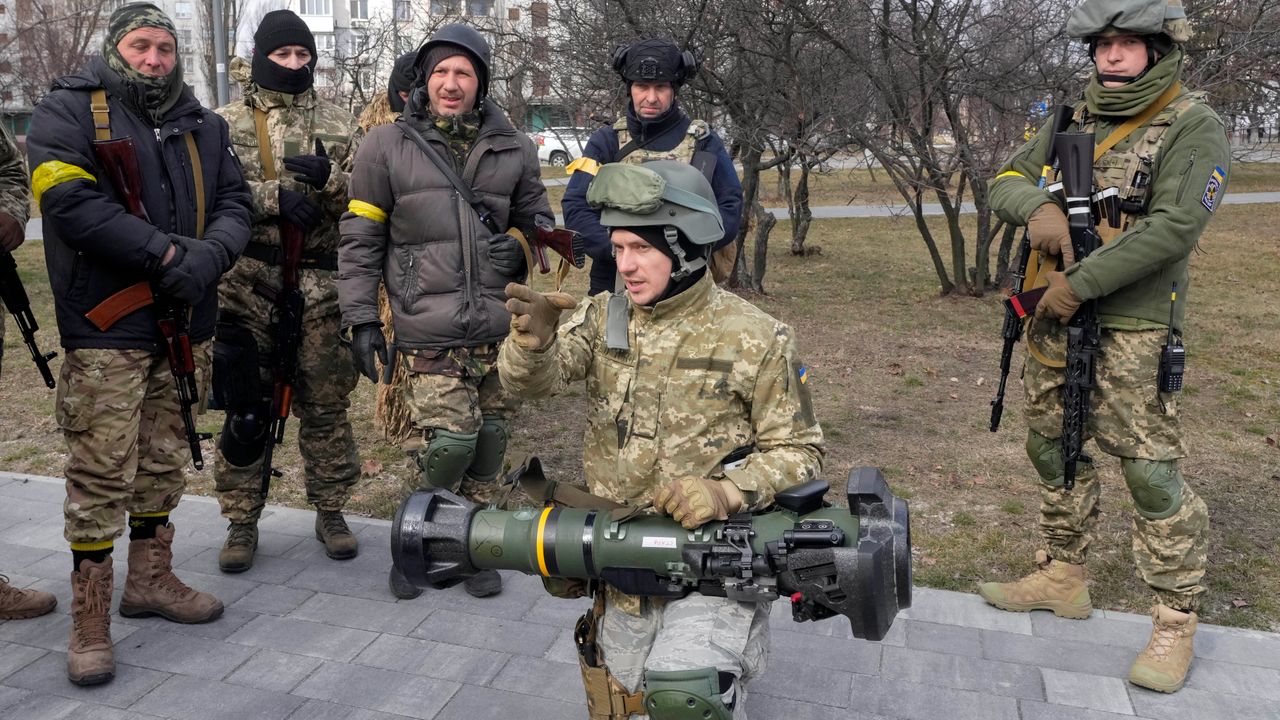 The US has also committed $1 billion in new U.S. security assistance – in one week.

On Wednesday, President Joe Biden gave a speech announcing the deployment of $1 billion in weapons to Ukraine, including combat drones and long-range anti-aircraft systems, for use in Ukraine’s war with Russia.

Making no mention of ongoing efforts to find a diplomatic settlement to the war, Biden warned that the United States should be prepared for “a long and difficult battle.”

But the most significant aspect of the speech was Biden’s statement regarding the background of the war, which exposes the extent to which the US had systematically prepared Ukraine for the conflict with Russia.

Biden presented a narrative of a years-long proxy conflict, in which the United States has been pumping billions of dollars in weapons into Ukraine. “In fact, we started our assistance to Ukraine before this war began,” Biden said.

We sent Ukraine more security assistance last year—$650 million in weapons, including anti-air and anti-armor equipment before the invasion—more than we had ever provided before. So when the invasion began, they already had in their hands the kinds of weapons they needed to counter Russian advances.

These statements refute the media’s presentation of Ukraine as a small and hapless nation suddenly set upon by a ruthless larger power.

The Ukrainian military, assisted by US advisers working within the country, was ready for war, which the Biden administration instigated. Ukrainian civilians caught in the crossfire were written off as the expendable losses of US imperialism’s anti-Russia strategy. The very fact that Ukraine is not a member of NATO has allowed it to be used as a proxy, armed to the teeth and used to bait the Russian government into its disastrous and deadly invasion.

Understanding the background of the war is not the same as condoning the Russian invasion, which is as strategically imbecilic as it is politically reactionary. It was the desperate response of the bankrupt regime that emerged from the dissolution of the USSR.

But it is necessary to refute the lying narrative within which this war—which has cost thousands of lives and can still escalate into a nuclear war—has been framed by the propaganda organs of the US and NATO powers.

On Saturday, my administration authorized another $200 million to keep a steady flow of weapons and ammunition moving to Ukraine.  Now I’m once again using my presidential authority to activate — to activate additional security assistance to continue to help Ukraine fend off Russia’s assault — an additional $800 million in assistance.  That brings the total of new U.S. security assistance to Ukraine to $1 billion just this week.  These are the lar- — these are direct transfers of equipment from our Department of Defense to the Ukrainian military to help them as they fight against this invasion.

In 2013, then Assistant Secretary of State for European and Eurasian Affairs Victoria Nuland reported that the United States had spent $5 billion to help Ukraine “achieve its European aspirations and other goals.”

The outcome of this influx of cash and more direct forms of intervention by the imperialist powers was the 2014 US-backed coup, led by fascist forces like Svoboda and the Right Sector.

Within months, the Ukrainian parliament renounced its country’s non-aligned status and announced plans to deepen its cooperation with NATO “in order to achieve the criteria which are required for membership in the alliance.”

The 2014 coup triggered the secession of Donetsk and Lugansk in Eastern Ukraine, as well as Russia’s annexation of Crimea, a mostly-Russian-speaking region, following a referendum.

In an effort to contain the war raging in Eastern Ukraine, the Donetsk and Lugansk republics signed a ceasefire known as the Minsk agreements, which have been systematically under siege in subsequent years.

Despite the ceasefire, the United States continued to pump billions of dollars in weapons into Ukraine and to actively train its military.

A critical inflection point in this process was the first impeachment of Donald Trump, which centered around allegations that Trump predicated the disbursement of US weapons to Ukraine on Zelensky ordering an investigation of Biden’s son, Hunter, who received approximately $1 million per year for sitting on the board of Burisma, a Ukrainian energy company.

During the impeachment, it became clear just how central Ukraine was to US geopolitical strategy. In her testimony, former Ambassador to Ukraine Marie Yovanovich declared that Ukraine, “with an enormous land mass and a large population, has the potential to be a significant … force multiplier on the security side. … And now Ukraine is a battleground for great power competition with a hot war for the control of territory and a hybrid war to control Ukraine’s leadership.”

Now — now, I want to be honest with you: This could be a long and difficult battle.  But the American people will be steadfast in our support of the people of Ukraine in the face of Putin’s immoral, unethical attacks on civilian populations.  We are united in our abhorrence of Putin’s depraved onslaught, and we’re going to continue to have their back as they fight for their freedom, their democracy, their very survival.

As the impeachment was taking place, the United States was withdrawing from the Intermediate-Range Nuclear Forces (INF) Treaty and developing medium-range nuclear weapons that could reach Russia’s borders from Eastern Europe or even Ukraine. The withdrawal from the INF treaty was a critical element of the US preparations for “great-power competition,” which the 2018 national security strategy deemed the “primary concern in US national security.”

Biden’s comments clearly indicate that last year saw a major escalation in military assistance to Ukraine, with the US giving Ukraine, according to Biden, more military aid “than we had ever provided before.”

A key turning point that year was the US-Ukraine Strategic Partnership, announced on September 1, 2021, which declared that the US would “never recognize Russia’s attempted annexation of Crimea” and “intends to support Ukraine’s effort to counter armed aggression.” The strategic partnership effectively endorsed the doctrine, codified in a Ukrainian state strategy document in March 2021, for Ukraine to “recover” Crimea and the Donbas, by force if necessary.

In announcing the “strategic partnership,” the White House noted that “The United States has committed $2.5 billion in support of Ukraine’s forces since 2014, including more than $400 million this year alone.”

As the US continued pumping billions of dollars in arms sales into Ukraine, Russia published a set of demands for security guarantees in December, including that Ukraine would not become a member of NATO. In subsequent interviews, Russian President Vladimir Putin explained that Ukraine’s admission to NATO would make war inevitable.

This antecedent history explains the confidence with which the White House predicted Russia’s invasion of Ukraine. As Biden put it on January 20, “My guess is he will move in. He has to do something.” If Biden was able to predict this situation so directly, it was because his administration worked to bring about this outcome.

A few days after the German government announced a tripling of military spending, the biggest rearmament drive since Hitler is being put into action. The first purchase being made with the Bundeswehr’s 100 billion euro special fund is 35 US F-35 Lightning II stealth bombers, which can be used for nuclear strikes, among other things.

Lockheed Martin’s supersonic jets are currently considered the most modern fighter aircraft in the world and are used by seven European countries in addition to the US. Equipped with nuclear weapons, they can hide from enemy radar and, depending on the design, are capable of vertical take-off and landing. Their operational range of 1,090 kilometres corresponds to the distance between Passau in eastern Bavaria and Lviv in western Ukraine. The acquisition costs alone are estimated at well over 4 billion euros.

On Monday, Defence Minister Christine Lambrecht (Social Democratic Party, SPD) confirmed that the procurement of the F-35 fighter jets was to enable the German government to fight a nuclear war. Specifically for the task of nuclear sharing, the decision had been made in favour of the American carriers, which offered “a unique potential for cooperation” at the European and NATO level. Luftwaffe (Air Force) Inspector Ingo Gerhartz added that in the face of “Putin’s aggression,” a “credible deterrence” and “unity in NATO” were the “only answer.”

Under the NATO concept of so-called “nuclear sharing,” partner countries of the US—Germany, Belgium, Italy, the Netherlands and Turkey—can deploy US nuclear weapons stationed in Europe. “The possible armaments include free-falling nuclear weapons in addition to a variety of guided and unguided missiles as well as cruise missiles and bombs,” says an article on the official website of the Defence Ministry.

At the US airbase in Büchel alone, 20 B61 thermonuclear gravity bombs are currently being fitted with precision-guidance systems. Although each of these hydrogen bombs has an explosive power several times those dropped on Hiroshima, they are considered “small” and “versatile” tactical weapons with high military operational value. According to Gerhartz, all 35 new F-35s “will go to Tactical Air Wing 33 in Büchel, where we also perform the role of ‘nuclear sharing’.”

With the acquisition of F-35 fighter aircraft, the German ruling class is massively accelerating its war plans. It represents a departure from earlier proposals to procure either American F/A-18 bombers or new Eurofighters to ensure nuclear sharing, as both these models would first have to be converted and certified for nuclear weapons use. This potentially years-long process has now been eliminated.

Apparently, the selection was also about securing key German-European technologies against possible US interference. Newsweekly DerSpiegel, for example, writes that the potential conversion of the Eurofighters to nuclear bomb capability “would have required the cooperation of the American side … among other things, for the systems that would have been necessary for docking and releasing the nuclear weapons.” This would also have meant “disclosing large parts of the Eurofighter technology to the Americans.”