With the rising cost of living in major coastal US cities, many Americans are considering former Rust Belt cities as places to live.

Photo: For decades, downtown Dayton, Ohio, suffered from neglect. All photos by Stephen Starr / The National

For a time in the late 20th century, lifeless streets, random shootings and boarded-up shopfronts were a hallmark of life in Dayton, Ohio.

In the early 1900s, it was a thriving innovation centre. But like many other Rust Belt towns, Dayton later had its city centre decimated when people moved to the suburbs and traditional heavy industry fell into decline.

As recently as 2018, the city of 140,000 people received the kind of national attention no one wishes for, when it became the subject of a PBS Frontline documentary called Left Behind America.

But today, meaningful change is unfolding in the heart of the city.

With a growing demand for space and rising living costs in major coastal US cities, more and more Americans are considering former Rust Belt cities as places to live.

And, in many cases, the energy and activity of those cities’ cores are playing an important role in underlining that revival.

At 45,000 square metres, the 119-year-old Dayton Arcade had been left to waste for more than three decades. If cash-strapped city authorities had the money, it would have been torn down years ago, reports show.

But in August, after a $90 million investment, the Renaissance-style building opened to the public, with an entrepreneur centre, bistro, offices and co-working spaces, and dozens of apartments surrounding the complex’s stunning rotunda.

Celebrated urban planners labelled the redevelopment the “most transformative project in America”.

Its revival has attracted a local university, which has more than 350 students, as well as a wide assortment of businesses, back to the area.

“We’re not just trying to support a community initiative to repurpose the space,” says Vincent Lewis, who leads the University of Dayton’s LW Crotty Centre for Entrepreneurial Leadership, “but also to generate opportunities for our students to plug into the entrepreneurial ecosystem”.

Dayton’s city centre has also embraced other significant changes. Partly because of pandemic-related social distancing restrictions, city streets shut at the weekend to accommodate outdoor dining, creating a vibe reminiscent of southern Europe rather than the Rust Belt.

A summertime, open-air concert series draws hundreds of people, while a surfing school has popped up on a nearby river.

“I live four blocks from here and when I go for a run in the morning, you see people out walking their dogs, going for a run,” Mr Lewis says. “It’s a much different environment today than it was 15 or 20 years ago.”

Dayton isn’t alone. Many other small Midwestern cities are investing millions in their urban environments.

In Fort Wayne, Indiana, a city of about 265,000 people, more than $1 billion has been invested over the past decade to revive a once-neglected city centre. Farther north in Michigan, the city of Grand Rapids is spending hundreds of millions in reimagining its waterfront space by adding recreation and living facilities.

These efforts, combined with changing lifestyle choices brought about by the pandemic, are drawing people to formerly stagnant cities.

Dayton native Danny Tuss returned to Ohio with his wife and son during the pandemic after more than 15 years spent living in New York City, where he worked at the Brooklyn Museum.

“We got sick in that first wave in March [2020] and spent seven months in our one-bedroom apartment with our one-and-a-half-year-old, working,” he says. “That was not fun.”

Since moving to Dayton in 2020 to be closer to Mr Tuss’s ill mother, the family has bought a large, single-family home on a sprawling lot.

“We have a garden, which is a huge deal for us,” he says. For him, it’s the access to green space, among other things, that prompted him to move back to the Midwest.

“Having lived in other places and travelled, I certainly grew to appreciate all the things Dayton has to offer,” he says. Since moving back, he’s on a mission to recruit friends in New York to move out to Ohio.

Mr Tuss isn’t alone: since the start of the pandemic, nearly half the US population has moved or considered moving home, MarketWatch reported. Enabled by the increase in remote work, families are leaving large cities for cheaper properties in the US heartland in droves.

But not everyone is being helped by the resurgence. Residents in several black-majority areas, the poorest and most segregated parts of west Dayton, continue to struggle with depressed economic opportunities and crime.

For Jake Wells, who runs JW’s Wine Cellar in the predominantly black district of Trotwood, 12 kilometres north-west of the city centre, business has, for the most part, been good.

But Mr Wells says decades of neglect have left a mark that is difficult to erase.

“We just lost a grocery store across the road. We have no restaurants around here. If you want to go out to eat, you have to go to the next town over,” he says.

When a motorway on the opposite side of Dayton opened 30 years ago and fuelled the building of new malls and outlet stores, businesses — and customers — were drawn away from Trotwood. In recent years, child poverty rates in the district have risen to among the highest in Ohio at more than 50 per cent.

The Abandonment of Small Cities in the Rust Belt

The loss of manufacturing jobs gutted these smaller metropolitan and rural areas. What will it take to revive them?

“We’re black; we’re not getting the attention that we should. That’s just the bottom line,” Mr Wells says.

And while the Midwestern revival is lauded by many, smaller Midwestern cities — Dayton included — have been growing and adding jobs at far slower rates than bigger neighbours such as Columbus and Pittsburgh.

Still, the sense of change and possibility is alive and well. In December, it was announced that the wider development of the Dayton Arcade would receive a further $124m investment.

Mr Lewis, who as a child decades ago used to run around the Arcade space, says bringing students to the area, where they can interact with people from all walks of life, is essential in building a new social fabric for the city.

“And what we’re hearing now,” he says, “is that our students are wanting to stay in Dayton.”

With decades of decline in the rear-view mirror, that young blood is poised to shape the city’s future. 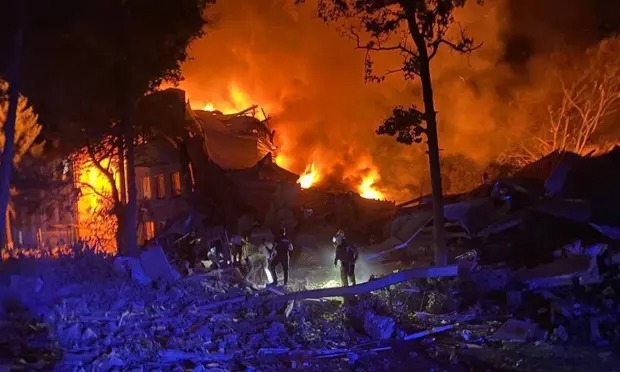 What does Russia want from Ukraine?